Hydrogen (H2) as a fuel will play an important role in our future energy supply and is already suitable for everyday use in mobility. Especially in the transport sector, hydrogen is an emission-free alternative with short refuelling times and long ranges, without any restrictions on the payload.

We’ve already laid the foundation for hydrogen mobility by building and operating the Germany-wide H2 filling station network. Let’s enter a new age of mobility together! We are at your side as a partner with a lot to offer.

Refuelling your fleet with progress

Our H2 filling station network forms the foundation for the mobility of your high-performance e-vehicle fleet. We support you in successfully switching to H2. Become a cooperation partner now.
Read More

We develop, build, and operate your hydrogen filling station

As an expert with many years of experience, we offer comprehensive solutions and services including site assessment, planning, construction, and operation for your H2 station.
Read More
H2 MOBILITY Germany presents 110 million euro investment plan and fund managed by Hy24 as new financial investor

Just in time for the start of the market ramp-up of light and medium hydrogen commercial vehicles, an international investment fund is participating in the hydrogen filling station infrastructure expansion for the first time.

We accompanied the presentation of our new investor Hy24 with a livestream.

Do you have a specific question or suggestion for us?

Please feel free to email us.
We will get back to you.
Want to know where the hydrogen stations are?

As a website and app, our H2.LIVE platform provides real-time information on the current status of all public hydrogen refuelling stations in Europe. See where the nearest station is and when it is open, and navigate directly to it. Hydrogen mobility for unlimited travel and transport.

Delivering while others are still deliberating

More than a job – Help us write the hydrogen success story

Our company is growing continuously – which leads to the creation of new professions and opportunities!  We are looking for experienced experts or talented young professionals who want to develop with us and contribute their skills and talents to the exciting field of hydrogen. Because we’d like to make unlimited hydrogen mobility possible, together.


Hydrogen is
a big mover! 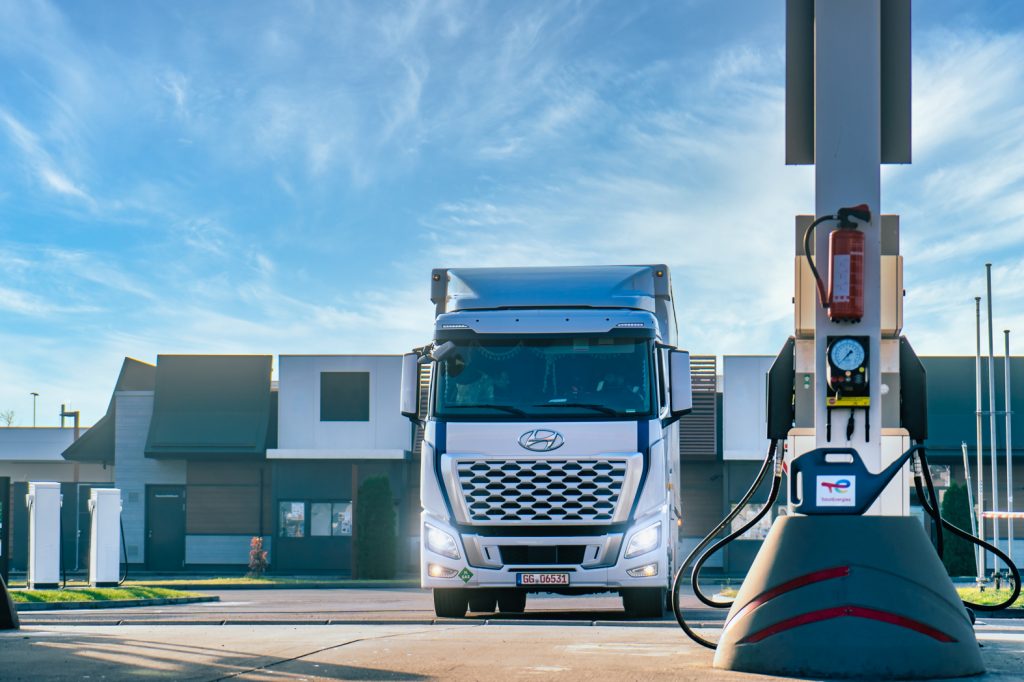 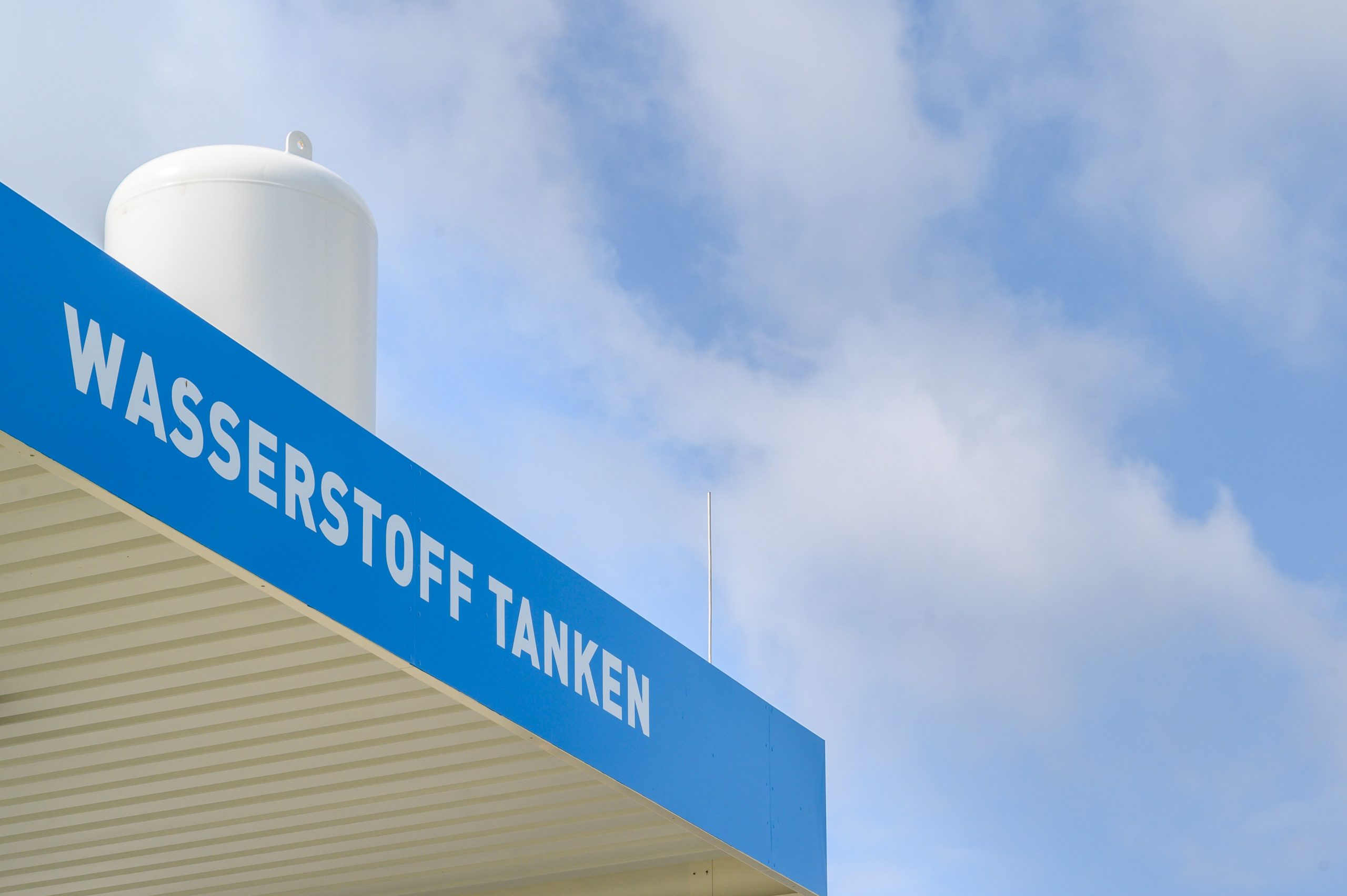 Bonn, 26 Oct 2021 | Tank & Rast has joined the world’s largest hydrogen filling station operator, H2 MOBILITY Deutschland, as an associated partner. In Germany, H2 MOBILITY currently operates 88 of 91 H2 filling stations in seven metropolitan areas (Hamburg, Berlin, Rhine-Ruhr, Frankfurt, Nuremberg, Stuttgart and Munich) as well as along connecting trunk roads and motorways, with 15 more stations currently under construction. To accompany the ramp-up of commercial hydrogen-powered vehicles, H2 MOBILITY is also expanding its offer for other pressure levels and refuelling quantities. This is an exciting and promising field for Tank & Rast, as the expected increase in [the dynamics of] hydrogen-based heavy goods traffic will also lead to an increased demand for corresponding infrastructure along the motorway. For Tank & Rast, the partnership is therefore a logical step on the way to the service station of the future. The focus is on the strategic further development of the locations and their provision of relevant drive energies in the future. The option of offering hydrogen for use in fuel-cell commercial vehicles could usefully supplement the already existing infrastructure of fast chargers for battery electric vehicles.. “Our collaboration with H2 MOBILITY is the next step on the road to climate-friendly mobility,” explains Peter Markus Löw, CEO of the Tank & Rast Group. “By joining H2 MOBILITY, Tank & Rast is underscoring its commitment to sustainable mobility on German motorways. Hydrogen will become increasingly important, especially in heavy goods transport, and we want to be part of the project to establish an efficient, nationwide hydrogen infrastructure for fuel-cell trucks.” About Tank & Rast Tank & Rast is the leading provider of catering, retail, hospitality, fuel and fast-charger infrastructure on Germany’s motorways. Together with franchise partners, Tank & Rast operates around 360 filling stations and around 400 service stations (including around 50 hotels) on the German motorway network. Around 500 million travellers a year visit Tank & Rast’s service operations, which stand for consistent customer orientation and high service quality. About H2 MOBILITY H2 MOBILITY Deutschland GmbH & Co. KG is responsible for the development of a nationwide hydrogen infrastructure in Germany. From 2021 on, new stations will be built where there is demand for commercial vehicles and where a public filling station makes sense for a growing network of filling stations for passenger cars. H2 MOBILITY handles all the tasks – planning, construction, operation and marketing – that are necessary for successful network expansion and operation. Shareholders of H2 MOBILITY are Air Liquide, Daimler, Hyundai, Linde, OMV, Shell and TOTAL. BMW, Honda, Toyota, Volkswagen, and NOW GmbH, Germany’s National Organisation for Hydrogen and Fuel-Cell Technology, advise H2 MOBILITY as associated partners. Contacts Autobahn Tank & Rast Gruppe GmbH & Co. KG Dietmar Thomas, +49 (0) 2 28 9 22-2799, dietmar.thomas@tank.rast.de H2 MOBILITY GmbH & Co.KG Sybille Riepe, +49 (0) 170 58 70 317, riepe@h2-mobility.de
19.10.2021
The district of Düren becomes hydrogen-mobile: Construction work starts on the first hydrogen filling station 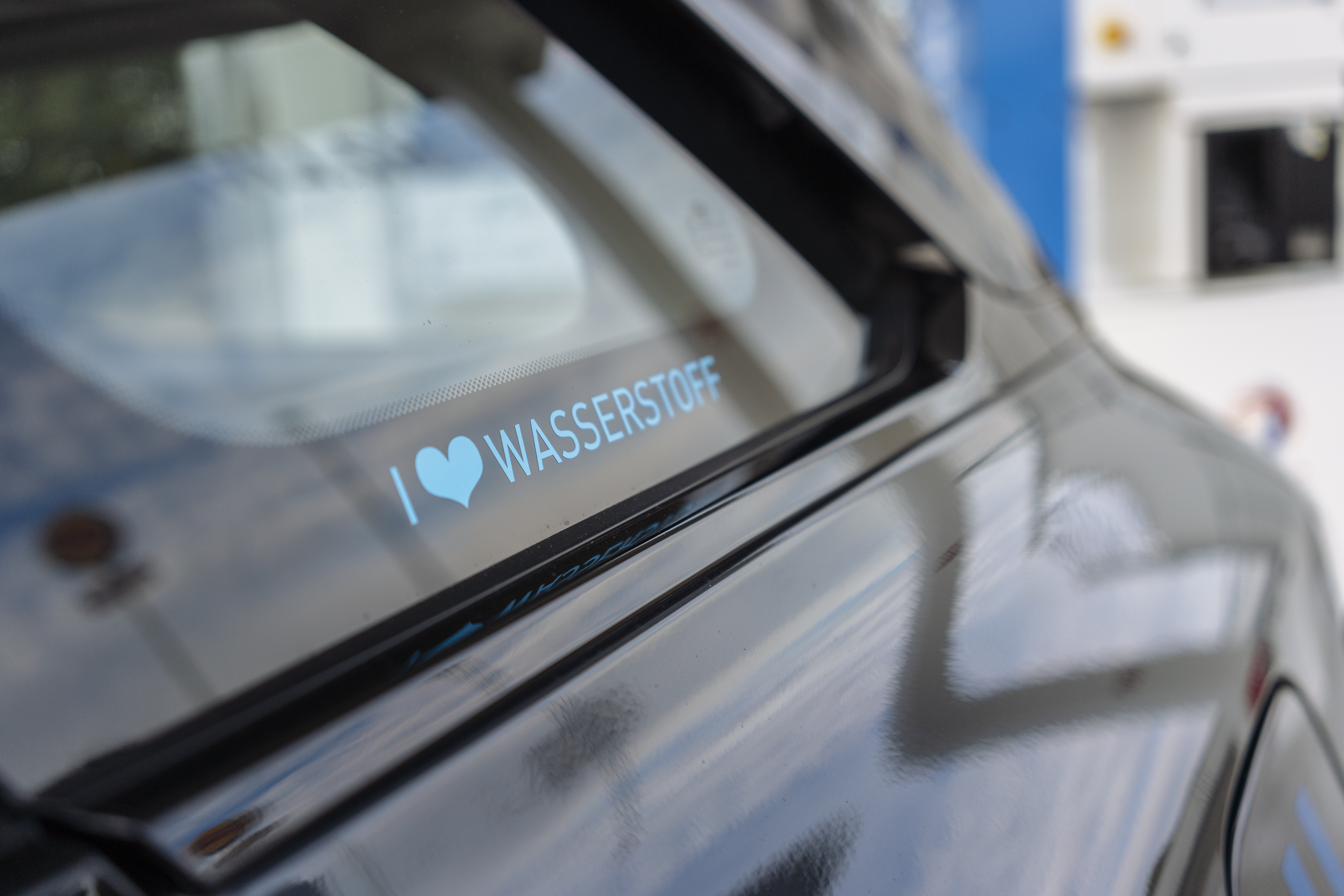 Kreis Düren, 06 October 2021 | Buses and cars will soon be able to refuel with hydrogen at the Shell filling station “Im großen Tal 1” in Düren. District Administrator Wolfgang Spelthahn, Falk Schulte-Wintrop (H2 MOBILITY) and Josef Busch, Managing Director of the Shell brand partner company PM Pfennings, have now pointed out the possibilities of hydrogen in the transport sector in a joint statement on the occasion of the start of construction of the newly built H2 filling station in the industrial estate. The builder and operator is H2 MOBILITY Deutschland, the technology comes from Air Liquide. At present, hydrogen is mainly used to refuel electric vehicles with fuel cells. Their advantages: no noise, no pollutants, but the same use, speed and range as vehicles with petrol or diesel engines. Hydrogen vehicles have ranges of 500 to 700 kilometres and refuel in only three to five minutes; buses, like conventional buses, need about 15 minutes to refuel and thus achieve a range of about 300 kilometres. In the medium term, however, commercial vehicle manufacturers also want to bring fuel-cell-powered vehicles onto the market. The hydrogen filling station in Düren is scheduled for completion at the end of 2021. It is conveniently located on the A4 motorway and complements the 18 hydrogen filling stations in NRW to date. As of today, the district of Düren has ordered five hydrogen buses and already uses two H2 vehicles in its fleet. The first hydrogen buses will arrive and operate in the Düren district by January 2022. From then on, five more buses will be added each year. The fleet of the Düren district will also be expanded with more H2 vehicles. In addition, some municipalities such as Nörvenich and Jülich as well as private companies are now also driving hydrogen cars. Next year the district of Düren will start producing green hydrogen on the basis of solar energy at the Brainergy Park in Jülich. District Administrator Wolfgang Spelthahn: “Today we have reached another important milestone. We are firmly convinced of hydrogen technology and plan to build four more H2 filling stations distributed throughout the district.” PM Pfennings also relies on hydrogen and plans to build an H2 station in the district of Düren, especially for heavy-duty transport: “It is for heavy-duty applications that hydrogen offers the greatest advantages – short refuelling times, long ranges and low weight,” says Josef Busch. “With the station in Düren, we are closing the supply gap between Cologne and Aachen and thus on the way to Belgium and the Netherlands,” said Falk Schulte-Wintrop, responsible for strategic corporate development at H2 MOBILITY. There are currently already 91 hydrogen stations nationwide. To refuel with hydrogen in Germany, you need the H2 MOBILITY card, which can be easily ordered online at H2 LIVE. The federal government is funding the construction of the hydrogen filling station in Düren through the National Hydrogen and Fuel Cell Technology Innovation Programme (nip) with about 1.3 to 1.4 million euros. About H2 MOBILITY H2 MOBILITY Deutschland GmbH & Co. KG is responsible for the nationwide development of a hydrogen infrastructure in Germany. From 2021 onwards, further stations will be set up where there is demand for commercial vehicles and where a public filling station makes sense for a growing network of filling stations for passenger cars. H2 MOBILITY takes on all tasks – planning, construction, operation and marketing – that are necessary for successful network expansion and operation. The shareholders of H2 MOBILITY are Air Liquide, Daimler, Hyundai, Linde, OMV, Shell and TotalEnergies. BMW, Honda, Toyota and Volkswagen as well as NOW GmbH Nationale Organisation Wasserstoff- und Brennstoffzellentechnologie advise H2 MOBILITY as associated partners. More information: H2 MOBILITY About Fred Pfennings GmbH & Co. KG The family-run company Fred Pfennings GmbH & Co. KG can look back on a remarkable development in its 60-year history. Founded by Fred and Anni in 1961, the company started with a manageable range of lubricants. Today, PM Pfennings, now in its third generation, supplies a network of around 90 petrol stations and, with its wide range of lubricants, is one of the most renowned mineral oil suppliers in the region. PM Pfennings employs a team of over 200 people and works closely with its service station partners. PRESSEKONTAKTE: H2 MOBILITY Deutschland GmbH & Co. KG Sybille Riepe +49 (0) 170 58 70 317 riepe@h2-mobility.de Shell Deutschland Oil GmbH Axel Pommeränke +49 (0) 40 63 245 290 Axel.Pommeraenke@shell.com Air Liquide Deutschland GmbH Nicola Blumhofer +49 (0) 211 6699-4242 nicola.blumhofer@airliquide.com
14.06.2021
Braunschweig – Where hydrogen mobility is already a reality 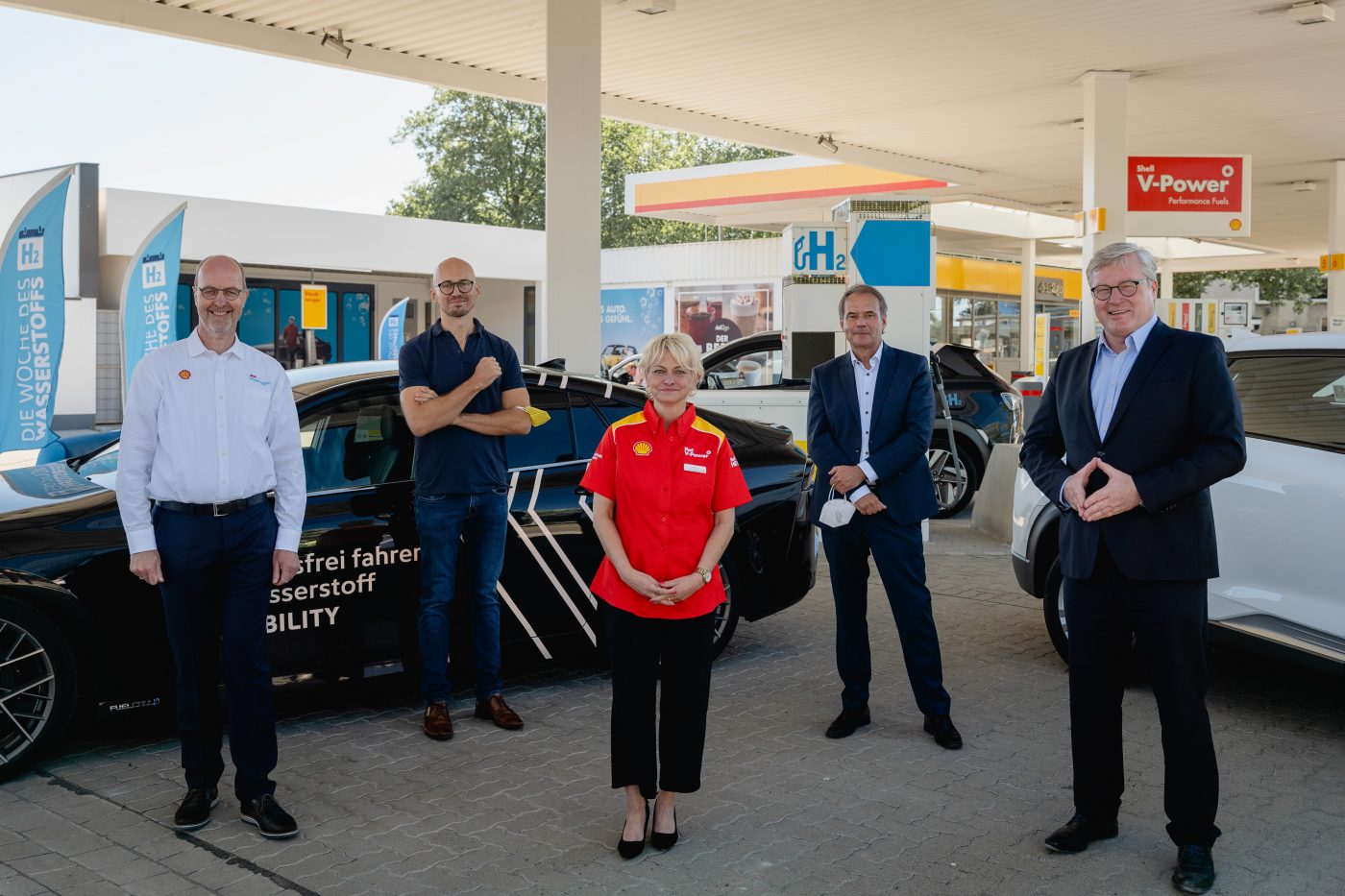 Do you have a specific question or suggestion for us?
Please feel free to email us.
We will get back to you.
News & Press Career Imprint Data protection declaration